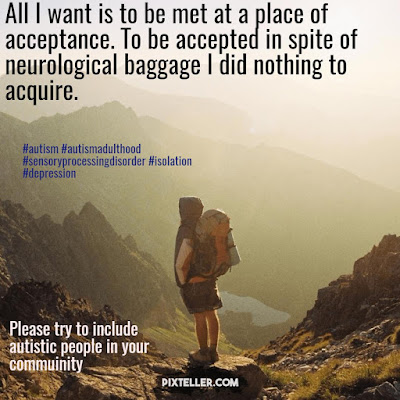 I do view my autism symptoms as disabling. To not be able to socialize (though I need very small amounts as compared to NT people) or contribute save from behind a PC keyboard is tremendously depressing.
There is much said about accommodating autistic kids. From schools to movie theaters, action has been taken to better include autistic kids.
Those same kids will NOT outgrow their autism. They may better learn how to cope with their anxiety and frustration, but there will always be barriers, through no fault of their own, they cannot overcome.
As adults, what will happen for the once accommodated kids who now need inclusion and accommodation in NT oriented institutions of learning, living spaces, recreation spaces, shopping and social services.
Autism is a very broad spectrum. Not all autistic people who are verbal and have a higher IQ function as independently as Temple Grandin.
Mean spirited people, sadly some parents of autistic kids, have referred to adults on the spectrum as "Dorito eaters" who sit in front of their computers all day and eat Doritos. This actually was a common term on Autism Speaks forums back in the mid 2000's when I was naive enough to be a member.
Though I don't eat Doritos, the mean spirited term does painfully touch a bit on a stereotype for me.
To some degree, I am the stereotypical autistic adult who sits behind a PC or TV most of the day. My parents are both deceased and I am 100% dependent on a single family member. I am slightly overweight and when I have meltdowns, they are violent. I don't drive due to the stimulation of the world around me. Any change outside of my decision making is hard to process, sometimes to the point of tears.
However, My emotions are felt intensely- I am not devoid of them. I do have a friend. I am not tech savvy. I don't own a smart phone and don't want one. I am creative and have a vivid imagination.
With all attributes and deficits included, where do and how will I assimilate into my community?
Perhaps providing support for people with an IQ of 71 or above and who can feed and dress themselves is a good place for services like Day One Network to start, unless you live in corrupt state that has suffered a pension crisis and whose solution is to begin with cutting as many social service programs as possible.
Moving is not an option, because my sibling's job is not one they can duplicate elsewhere.
It is beyond depressing to keep on hearing "no", "sorry" or "best wishes" when reaching out to various organizations that help find services for those with autism.
I am 37. I could live another 30 years. Perhaps 40. Imagine if this is you or your child and 3-4 decades of chips and PC/TV are all that awaits them.
I would write my Governor yet another letter, but I am tired of the same form letter I keep receiving with the same tired cliches: He is aware of autism. There are tough choices to be made given the budget crisis. He thanks me for writing and tells me not to hesitate contacting him in the future.
God designed each of us with a purpose. Not all are able of nurturing and giving of that purpose without help.
Yet taxpayer dollars keep going to Planned Parenthood to fund abortions, some of those being babies with special needs (Down's Syndrome, Spina Bifida). It is haunting to read comments like "Well, better to abort the fetus as not everyone can afford to care for a child with special needs." I read that comment on Facebook. Fetal testing for autism is already taking place.
I listened to a Ted Talk. A geneticist was giving his case against "designer babies".
If you saw the dystopian "Gattiga" in the late 1990's, you know about how the genetically modified (GM's) could dominate and rid the world of "naturals"-non-GM people.
Here is a TED talk by Paul Knoepfler that further explains how creating GM people would be a bad idea.
Has the love of money totally eclipsed human compassion? Kill autistic people before they even enter the world or invest in them-those like me who aren't going to Silicon Valley or living independently while coding the next big thing.
God declares all lives are valuable, even if they can't lead what secular society calls "meaningful live$".

For you created my inmost being;
you knit me together in my mother’s womb.
14I praise you because I am fearfully and wonderfully made;
your works are wonderful,
I know that full well.
15My frame was not hidden from you
when I was made in the secret place,
when I was woven together in the depths of the earth.
16Your eyes saw my unformed body;
all the days ordained for me were written in your book
before one of them came to be.
Psalm 139:14-16 NIV

Popular posts from this blog

Allison K.
My autism self advocacy blog. Now including Funkonovo(my funko family) and their amazing adventures.